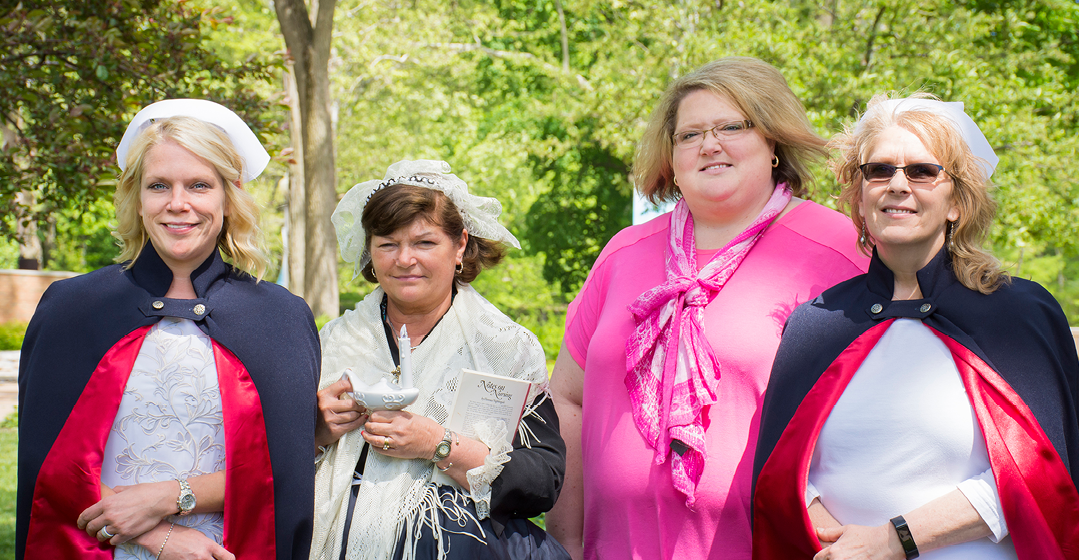 “The concept of honoring nurses who have given themselves to the care of others, was the initial appeal for me. It became more than a concept from the first time I stepped into a patient’s home, surrounded and embraced by her family, friends and fellow nurses. This nurse, who was dying at home, cared for by her parents, was younger than I. Her 15-year old daughter was at her bedside as we tried to thank her for her years of service to others. I have been a hospice nurse for more than 20 ye 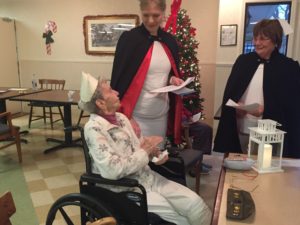 ars. I have been privileged to share in many life closures, but in this situation, I struggled with my own tears.”

That is how Susan Boesch, RN, OCN, CHPN, with Ohio’s Hospice of Dayton describes her experience with the Nursing Honor Guard program, which was created to celebrate and honor those who have dedicated their professional lives to nursing. With growing demand for these ceremonies, Ohio’s Hospice needs more staff volunteers to assist in honoring nursing professionals at the end-of-life.

The Nursing Honor Guard is comprised of Ohio’s Hospice volunteer nurses who conduct a ceremony at the patient bedside. Upon request, the Nursing Honor Guard conducts a ceremony to celebrate the service and honor nurses who have life-limiting illnesses and have become patients in the care of Ohio’s Hospice. Dressed in traditional and historical uniforms, the Honor Guard recognizes the nurse for her commitment to caring and providing compassion to patients. Career highlights and individual achievements are highlighted as part of the ceremony, in which the honoree is presented with a pin and certificate of appreciation.

According to Ohio’s Hospice of Dayton Team Leader Jena Langford, RN, BSN, CHPN, CCM, “This program grew from a Bright Idea submitted by Christy Dempsey RN. Christy attended a graveside nursing honor guard tribute and was touched by the respect and appreciation given to the nurse that had passed. Christy wanted Hospice to honor our patients who are nurses.” Jena and Bessie Marshall adapted a program for Ohio’s Hospice that focuses on bedside tributes while patients are still alive.  Langford explains, “We interview the family and/or patient and create an individualized script tailored to each patient/nurse.  It is an honor to write these tributes and to be involved in presenting them” 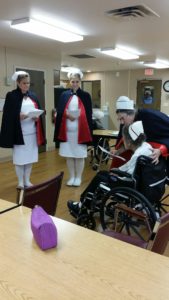 Boesch says she has a new sense of appreciation for the role of nursing as a result of participating in Honor Guard Ceremonies. “I have seen, first hand, just how much a career in nursing means to the whole family. How proud they are of her/his achievements and service to others.”

[quote style=”boxed” float=”right”]Dressed in traditional and historical uniforms, the Honor Guard recognizes the nurse for her commitment to caring and providing compassion to patients. [/quote]

Her sentiments are echoed by Ohio’s Hospice of Dayton Care Team Coordinator Linda Cummins, RN, BSN, CHPN, who opted for a career in nursing after completing military service. “I recall that feeling I had when I put on my nursing cap and was given a Nightingale lantern at my nursing school graduation.  I felt a sense of pride and community — very similar to the camaraderie of the military.  I recall the deep sense of honor and responsibility I felt as we all recited the Nightingale Pledge together at the conclusion of our graduation ceremony.  I have seen that sense of pride on the nurses we have honored with the Nursing Honor Guard.  There is a sense of purpose, honor, and responsibility – responsibility for something much bigger than one person, one nurse or one patient.  There are very few things in the civilian world that echoes military honor and commitment, but nursing is very much like that. The Nursing Honor Guard has given me that gift, that sense of awesome responsibility we have in caring for others.”

Langford cites Cummins and others whose participation has been a key to the success of the Nursing Honor Guard effort. “I would like to give a special thank you to the core group of staff who enable me to keep this program running smoothly – Linda Cummins, Terri Knopp, and Christy Dempsey. And a great thank you to all the staff volunteers taking time out of their day to complete these tributes!”

Ohio’s Hospice of Dayton LPN is Nurse of the Year