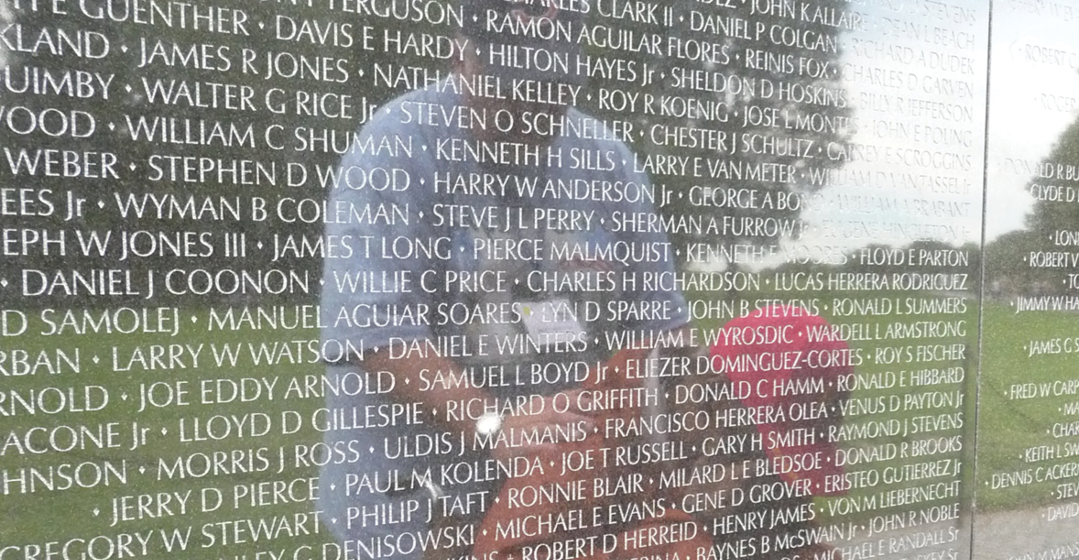 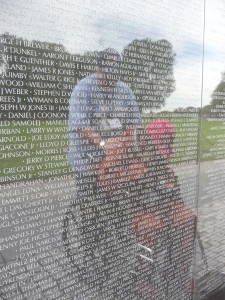 This story is about two men who found each other through their acts of service, one for his country the other for his fellow man.

In the 1960’s David joined the U.S. Marines Corps while I, as a first grader,  answered a questionnaire indicating I wanted to be a minister. In September of  2011 our individual walks brought us together as we met at the Dayton International Airport to board a flight to Washington D.C. together.  We were part of the Honor Flight, which enables veterans to visit Washington D.C. monuments honoring their service.  On that early Friday morning we boarded, David was the only Vietnam veteran among 34 former soldiers. I was serving as a hospice chaplain and escort on the trip.  David was decked out in his Marine Corps shirt and hat, and was presented an Honor Flight T-shirt to wear for the day. David had never been to D.C., much less viewed the memorials.  He expressed mixed emotions about seeing the wall for the first time. I assured David I would be with him the whole way.

Our plane touched down at the Baltimore Airport and we boarded a bus to D.C.  Our first stop was the WW II memorial where David had his picture taken by the Ohio name plate. We took several photos of inscriptions on walls & decorations at the memorial. I took a break and when I looked around David had stepped out of his wheelchair and crossed two streets in an effort to get closer to the Jefferson Memorial. He laughed uncontrollably when I caught up with him & threatened to put him on a leash. We boarded the bus and traveled to the Iwo Jima memorial. This Marine swelled with pride as he stood beside the Marine Corps insignia as I took several photos of him with the memorial in the background. We then boarded the bus & drove to the Air Force memorial for lunch. We stood at the memorial in awe, looking at our nation’s capital and for the first time seeing sites we had previously only seen on T.V.  Just then I saw my Marine looking off to the left at a portion of the National Cemetery. This happened to be the section where several African American soldiers were buried in unmarked graves. David knew the story and shared it with me. The sadness in his eyes and the look of betrayal by his own country was nearly too much to bear.

We then boarded the bus and made our way to the Vietnam Memorial.  Anxiety had reached its apex in David’s mind by this time and everyone else on the bus shared the sense that “This is his memorial.”  We exited the bus and David sat in his wheelchair.  A nurse accompanied us to capture the visit on camera. Our first stop was a station containing what appeared to be a combined phone-book of L.A. & New York city when in fact it was an alphabetical list of those who sacrificed their all for their country. Tears began to fall as we looked for David’s friend, but could not find him because nick-names are not recorded. We turned and walked to the entrance where three soldiers in jungle gear were immortalized. I snapped a shot of David in front of the three statues and had he been dressed in his jungle gear he could have been the fourth man in the memorial.  Then we headed for “The Wall.”

As we approached the ramp leading down to the wall on our left David softly said, “Oh my God!” This was it, David’s first time at the wall viewing the names of his fallen brothers.  A flood of emotions overwhelmed him. David began to cry so I placed my hands on his shoulders & encouraged him saying, “You’re doing great Marine. You’re doing great.” As we approached the half way point David asked me to stop. He stood himself up unassisted, placed his left hand on the wall and wept. I was overwhelmed as I watched this weakened man have an unparalleled experience standing on his own, unassisted, connecting emotionally & spiritually with the some of the soldiers he served with some 40 years ago. I was focused on being with David in several ways & then I noticed many others were with David as well. The sound of camera clicks & flashes were heard all around him.

David sat down in his wheelchair & said, “I’m ready” and we began making our way up the ramp of the east wall.  We were nearly at the end when a man & his wife stopped us. The man reached out his right hand to David and said, “Welcome home Marine, welcome home.” The man’s wife knelt down in front of David looking him in the eyes & said, “Thank you for all you’ve done for this country.”

Upon exiting the plane on our return flight to Dayton we were greeted by a line of active Air Force men & women in uniform welcoming us home.  An atmosphere of humility settled on each veteran & many of them became a puddle of tears as they were overwhelmed with the crowd of well wishers congratulating them & thanking them. Several people sought out David as if they knew he was the only Vietnam vet & lavished their appreciation on him. A local ROTC unit was standing at attention holding the flags of the United States, the State of Ohio, & the Marine Corps & just when we thought it couldn’t get any better, an announcement came over the sound system indicating the colors will now be presented as we recite the pledge of allegiance. I watched men who had previously been unable to walk force themselves to stand, place their hands over their hearts, & with pride & through tears say, “I pledge allegiance to the flag of the United States of America. And to the republic for which it stands. One nation, under God, indivisible, with liberty & justice for all.” No more could be said to describe the pride & humility present simultaneously.

I couldn’t seem to stop myself from asking David, “Was this a good trip for you or did it stir up too many hurtful memories?” Without hesitation David said, “Oh no! This was great. Seeing the memorials, having strangers thank me & welcome me home has brought me closure that I never had or ever thought I’d find. No, no, this was a trip I’ll never, ever forget.”

It was a trip I will never forget either.

When asked, Curtis Blair tells you what he wants people to say about him. “I…

Two Hearts As One

For staff members at Ohio’s Hospice of Dayton, it was heartbreaking. Charles was alone in…

This year brought many moments and stories worth celebrating. We were honored to share these…